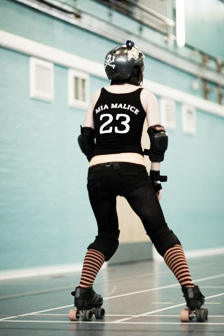 Roller Derby was born in America, in the 1930s. The original game was a 12 hour skate on a flat track (later changed to a banked track), focusing on endurance and speed. Men and women participated and Roller Derby swept across the country. In the 1940s Roller Derby was becoming a commercial success, with sponsors, and skaters making full careers in the sport. With the introduction of televised bouts, the violent aspect of Roller Derby became more popular than the sport itself, and eventually the game died out.

“Roller Jam” appeared in the 1990s, a similar game using a banked track and blades, but it wasn’t until 2000 that the game was played again in Texas on “quads”. From here Roller Derby was reformed, the leagues were run by Rollergirls for Rollergirls, and once again the sport has infected the country. It spread to the UK about 4 years ago with the start of the London Rollergirls, and has been growing ever since.”

There are five rollergirls from each team on the track at one time. Four rollergirls from each team make up the pack, and start on the first whistle, fighting for position with each other. As the second whistle blows, a “jammer” from each team starts from a few metres behind. Jammers wear helmet covers with a star on either side. The” lead jammer” is the first to overtake the pack. She can now call off the jam at any point during the two minutes. Both jammers must overtake the pack once and skate round to meet the back of the pack to start scoring. Both jammers score one point for every rollergirl she legally overtakes (no penalties). The jam ends at 2 minutes, or when the lead jammer calls it off. 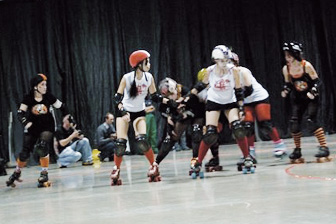 The “blocker”’s objective is to block the opposing jammer, help her team’s jammer to get through, and to stop opposing blockers from blocking her team’s jammer. One blocker from each team is assigned the pivot position; she generally stays at the front of the pack and should lead her blocking team by giving them information on skaters’ positions, and setting the pace. Pivots wear helmet covers with a wide stripe going from front to back.

Making contact in order to derail a member of the other team is called “checking” – you’re not allowed to go in fists first – legal zones are upper arms and hips. The pack should be a storm of rollergirls knocking into each other; the more opposing blockers you can take out the easier it is for your jammer to overtake !

“I’ve been skating with Sheffield Steel Rollergirls for 1 year 8 months. The team which was founded by “Pauline “Jane Doe-a-Go-Go” Chalmers” in 2008. Go-Go moved to Sheffield and wanted to meet new people, doing something fun. She was searching for sports groups and discovered Roller Derby on MySpace but there wasn’t a team in Sheffield so she started a MySpace page for “Sheffields Roller Derby” and it took off from there.

We started meeting at the roller rink in Sheffield city centre and just practised trying to skate and stand up on wheels. We put a few posters around the city and more people got interested. Eventually we found a venue to practise in. 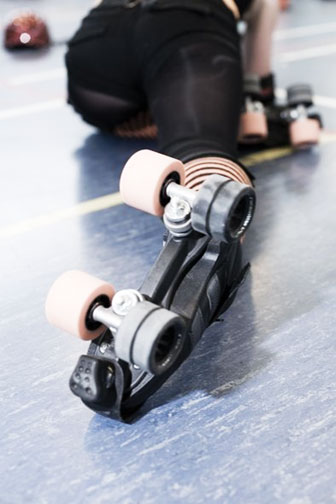 We train twice a week in local sports halls and in the summer we have extra sessions outside (weather permitting!).

We have a training committee who plan sessions to suit all of the levels of skaters we have, from beginners to bouting skatings. We do falling, agility, positional blocking and checking drills, endurance skating and we try out tactics and scenarios in scrimmaging sessions.

We wear good quality knee and elbow pads, wrist guards, helmet and mouthguard.  All pads have a hard shell as this allows us to do sliding falls which reduces the impact shock. Roller Derby is a full contact sport so falling safely is very important to avoid injuries, we practise falling a lot !

Most frequent problems are bruises, they can be quite spectular ! But occasionally there are sprained ankles and knees and very occasionally broken ankles. We’ve had a few dislocated shoulders, a cut to the chin and some sprained knees and ankles but thanksfully no broken bones yet !

A website called EuroDerby has started a power ranking table similar to those in the USA www.euroderby.org/results/table2010

This summer, you were present in Brussels during the rollerparades, did you meet other practising roller derby women here in Belgium ?

I had a fantastic time at at the Brussels and Antwerp roller parades ! I wish we had a Roller Parade in Sheffield ! I didn’t meet any Rollergirls there but there are teams starting up all over Europe now including: 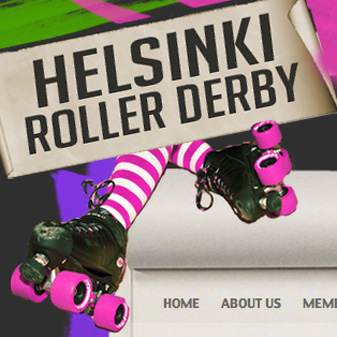 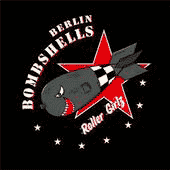 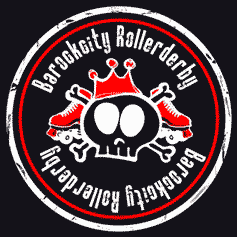 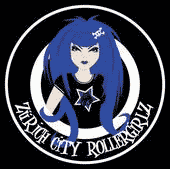 “It’s great to see that Roller Derby is getting more popular!”

I would recommend Roller Derby to anyone, its loads of fun, a really great way to keep fit and a fantastic way to make new friends. Its great to have a sport that is althletic but also has a fun side - the alter ego skate names and “boutfits”. The roller derby community is a very friendly and closeknit group that is very supportive and knows how to party! If you haven’t see it yet, get to a bout or watch it on You Tube, you’ll be hooked !

Sources: the interview “of Anne Tetley” realised by “Mowglish” – the photos from her profile Facebook – the last photo of the team was on the SSRG’ website.